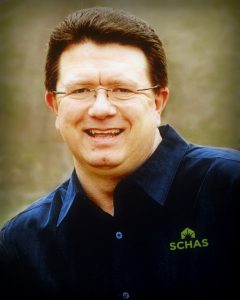 Tim began his career with SCHAS in 2001 as the Finance Director and became the Chief Executive Officer in October 2008.
He graduated from the University of Tennessee with a BS in Accounting and passed the CPA exam in November 1991.

With his leadership and vision, the agency has grown in area by serving more counties, increased the number of people served, opened Cedar Point Living– an affordable independent living facility, began offering transportation and shopping services, formed partnerships with other companies, and improved the lives of thousands of people throughout the East Tennessee area.

As the American population ages, the need for services is growing. Tim is dedicated to offering high-quality services at affordable prices enabling everyone we serve to receive the help they need. He states, “It is a privilege to serve older Americans. They deserve our respect and the ability to maintain their dignity.”

Return to our Home Page